An update in coming which has features that will help larger HLMSW installations manage their users and connected software along with a bunch of new features and bug fixes.

If you ever have to log into HLMSW using a different identity (to open up a different HLMSW collection or Company file) some changes in build 8.14 of HLMSW will make things a little easier.  It is now possible to group your HLMSW keys into logical folders which are displayed on the HLMSW Login screen 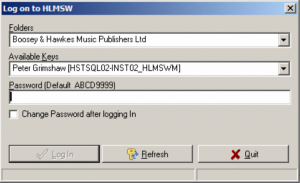 All you need to do to enable this is to put your .HLMSWKey files into separate named folders in the HLMSW Key location, and the folders will be displayed.  HLMSW remembers your selections for each folder and so switching between companies is a lot less complicated for system administrators.

This functionality is enabled by default for any installations with multiple Companies, and as part of the installation process, a new set of HLMSW keys will be generated, all of which will be saved in folders by the Company name.

To generate a new set of logins to take advantage of this feature do the following:

This build also includes some new functionality that was created to support some enhanced functionality to bridge HLMSW and external web-based systems.

The goal was to be able to go straight from HLMSW into a web-based accounting package (called NetSuite) so you could see a customer account or invoice using a few clicks rather than copying and pasting values from one system to another.  HLMSW already had the ability to create dynamic urls based on HLMSW Content via the Edit URL option in the HLMSW Config Editor and the URL Manager in HLMSW:

But this can only use the values in HLMSW itself – and if your attached package has a different set of identifiers, these must be saved in HLMSW somewhere. Rather than clogging up HLMSW with data that serves no other purpose, there is a new table (and related helper routines) in HLMSW called HLMSWEXTID which can be used to manage these values.  In this case, whenever an account or invoice is uploaded into the NetSuite software, the resulting identifier is saved in this table so that it can be recalled with just 2 clicks.

There are lots of applications for this technology, and so please contact us for more information if you are interested to learn more.

This entry was posted in Update. Bookmark the permalink.